Our entertainer will be talented singer, Margaret Church, once a Glasgow Branch Demonstration Team Dancer who now concentrates her talents on singing and entertaining accompanied by her pianist Stewart Henderson.

The total inclusive cost of the lunch will be £12.95, which can be paid directly into the branch Account: Account Name RSCDS Glasgow Branch Sort Code 80-54-01   Account Number 00772964

Please use as reference “SNLN + your name” so that the Branch Treasurer can identify who is making the payment. We ask that you use this method if at all possible, especially since it also decreases our associated costs.

Looking forward to seeing as many as possible on Thursday, September  29th at the Crookston Hotel.

If you would like: to attend any event; more information; your name added to the list for the future; please send an email to seniors@rscdsglasgow.org 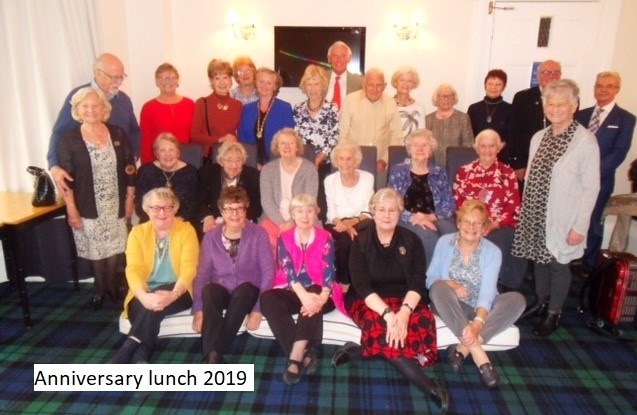 In 1998, as part of the celebrations for the 75th Anniversary of The Royal Scottish Country Dance Society (also the anniversary of the first meeting held in Glasgow in 1923, leading to the formation of Glasgow Branch), a group of senior non-dancers and a few dancers who were still active attended an afternoon tea dance. They very much enjoyed the social aspects of dancing and missed this when no longer able to dance. Hence they wished to meet on a more regular basis, in a suitable venue.  The first official meeting of the Seniors' Group was held in 1999 at the Ewington Hotel [Queens Park], organised by Ruth Beattie now Hon Branch President, assisted by Joyce Turkington and the late Dorothy Paterson.

With the passing of time, this event has evolved into four meetings per year, Spring, Summer, Autumn and a Festive Lunch in December, open to all members of Glasgow Branch whether or not they dance on a regular basis.  The general format for the ordinary meetings is a light lunch (soup, sandwiches, tea/coffee), followed by musical entertainment and/or a speaker.  (There is an inclusive charge to cover the costs of a meeting, which can vary from meeting to meeting.)

The last meeting of Glasgow Branch Seniors Group took place on Thursday June 23rd when our guest was John Carmichael. John is such an all round entertainer that he kept us laughing and singing from the moment he arrived until the moment he left. He did have a planned program but kept diverting from it as the conversation prompted him to tell different stories to the ones he had planned as he realised that other stories were more appropriate. He knew we would want to sing it and had several sets of tunes prepared that kept us singing and laughing and our toes tapping, until all too soon, our afternoon was over.